'Classic' Cruise along the Antarctic Peninsula

This expedition cruise is the perfect way to see all the highlights of the Antarctic Peninsula. After crossing the Drake Passage, which takes about 2 days, your polar adventure starts when you arrive at the first Antarctic islands north of the peninsula. From here on, you can enjoy visits to different sites along the Antarctic Peninsula each day.
The White Continent will impress you with its abundance of wildlife including five seal species and huge penguin colonies of Gentoo penguins, Adélie penguins and Chinstrap penguins. There are also many seabirds to be found, from impressive Albatross to different kinds of petrels. Antarctica is the perfect destination for whale lovers. Here you have a real chance to encounter species like the humpback whale, sperm whale, blue whale, orca and minke whale. Some swim by, others show how they catch large groups of fish. It can be a single whale, but also a group of up to thirty whales! Make sure you always have the camera at hand so you can capture these impressive moments.

It is nature that you will experience up close and personal during frequent shore excursions. The scenery is overwhelming while you explore the deep bays and fjords of the Antarctic Peninsula where massive glaciers flank a rugged spine of snow-capped mountains.

"Antarctica is a very beautiful place. We are very grateful that we were able to travel there and trust that it will continue to remain a wild and unspoilt place.
Especially with the dedication of companies like Waterproof who take an effort to promote sustainable travel by their membership of IAATO. "

Note:
This is a sample itinerary. We do our utmost to guarantee the best experience, unfortunately we have no control over the weather or wildlife behaviour. Ports of embarkation and disembarkation and sites may change depending on vessel and departure dates, weather- and ice conditions. 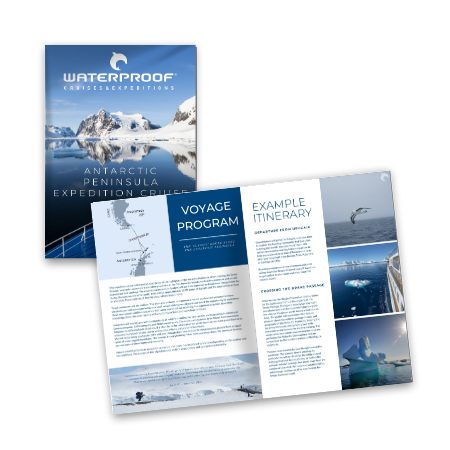 Travel to Antarctica this season!

We currently have new last minute offers to Antarctica almost weekly, more than we can publish on our website. Discounts go as high as 50%. Please contact us if you are looking for a cruise to Antarctica this season and we will help you find the best deal!